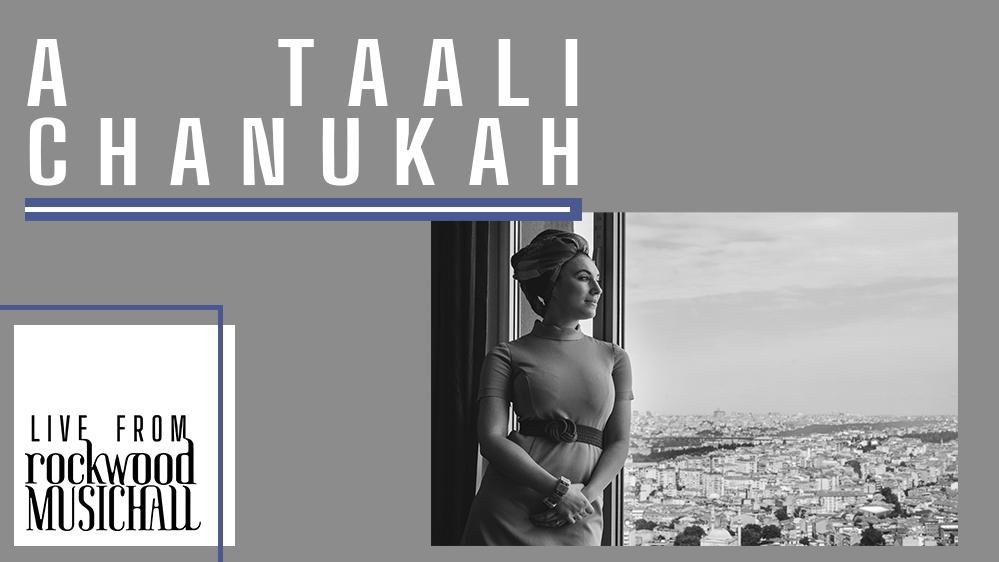 This event took place on December 17th, 2020, but replay to watch at your own pace is available!

UPDATE: This show has been moved to Thursday, December 17th due to the impending storm. All previous tickets purchased will be honored, and replay will still be available for up to 1 week from the end of the show.

Can't make the live show? No problem! The purchaser-specific ticket link will give you access to the live stream, AND allow you to watch the show at your own pace through December 22nd, 2020 at 9:30PM EST!

Tickets are $12 - please note the flexible pricing, and tipping options for venue and/or artist(s) within the stream.

Taali will always cherish and remember where she came from. But sometimes to best embrace your roots, you have to leave them behind. That’s precisely what chamber-pop singer/songwriter/producer Taali — née Talia Billig — did when she decamped from her longtime home of New York City for Los Angeles in 2017.

But before we talk about why Taali left New York, it’s important to understand how vital the city is to her. Born to a Jewish family in Washington Heights, New York, Taali — a family nickname she later adopted as her stage name — grew up learning the values of community and storytelling, attending weekly services with her parents and learning about their progressive heroes, like historic political organizers Clara Lemlich and Emma Goldman. Later, she’d connect with like-minded artists at the New School for Jazz and Contemporary Music in the West Village and work for Blue Note Records president Bruce Lundvall. She lived nearly a decade in her Lower East Side apartment, a stone’s throw away from Rockwood Music Hall.

As important as the city itself is to her, Taali thrives equally on community. In the summer of 2012, she created The Orchard Sessions, a video salon filmed in her Orchard Street apartment. Taali and her circle of friends (including Snarky Puppy, Luke Temple, Kate Davis and many others) would hang out at her Lower East Side apartment, usually after a show at Rockwood Music Hall. She’d bring in an artist, arrange a song with those on hand to play, then film with herself typically on piano, percussion, or harmony.

“I exist in a space where I assume from experience that this business and overall paradigm wasn’t made for us,” she says. “I come from mentors who heard that, understood that, and didn’t let that impede them. Rainbow Blonde is a non-black Jewish woman from New York, a mixed-race man from Minneapolis, and a white man from Indiana. The three of us founded it to create a space where people can fully pursue their artistry, celebrate their community, and do it entirely on their terms.”

Of course things weren’t always rosy in New York: Taali had to contend with years of vocal cord issues, which, in 2016, culminated with surgery and months of being unable to speak, let alone sing. As a musician and songwriter, this was the ultimate roadblock. What followed, though, was a creative renaissance of epic proportions.

Unable to sing herself, Taali leaned harder into writing for others. She moved to L.A., a city that, in her words, “centers more on songwriting than any city in the world right now.” She contributed seven songs to James’ 2017 album, Love In A Time Of Madness. She also wrote for Orchard Sessions alum Mad Decent hip-hop innovator Jarina De Marco and gospel performer Mali Music. She joined a Jewish service called Nefesh, part of Los Angeles’ Wilshire Boulevard Temple.

“I was really happy in that songwriting sphere,” Taali says of her time out West. “That time in Los Angeles opened my eyes. It seemed pretty similar to what I’ve read of Joni Mitchell Ladies of the Canyon phase in Laurel Canyon, but on the East Side instead of the Valley. I was surrounded by brilliant filmmakers, choreographers, fashion designers, songwriters, and singers. [It was] just this really beautiful moment of women. That’s a huge part of my artistry that I come back to, always.”

As she healed, Taali slowly regained the ability to sing again, and this time better than ever.

With her surgery providing more vocal range, in 2019 Taali wrote, co-produced and released the rhythmic pop venture I Am Here, a conceptual 15-track project bolstered by percussive breaths and claps and Taali’s undulating harmonies.

“Jewish people, after all, have a tradition of telling stories and asking questions. We weave our collective history and experience into melody, and into words,” Taali says.

With an intimate cover shot by famed photographer Janette Beckman, Stars captures Taali at the height of her singing and songwriting ability. The piano-led “Los Angeles,” reimagined from I Am Here, is a Regina Spektor-esque ode to starting over in an unfamiliar place. Later, the quiet, Fender Rhodes-led “Wayward Star,” which Taali wrote from her Orchard Street apartment, is a placid refrain about what it’s like “to be truly yourself with someone, and let down your guard.”

“Specifically, to be with someone who had been through as much as me was a new challenge, and also a new beauty,” Taali says. “I was thinking of both of us as broken people, but also beautiful people together.”

Closing out Stars, James joins Taali on the peaceful, harmonized “Snowfall On Orchard,” which sounds like a sister song to Imogen Heap’s vocoder classic “Hide And Seek.”

“I wrote ‘Snowfall on Orchard’ with José five years ago,” she says. “It’s the first original song that we wrote together, and I think it’s a little postcard in time of a very, very optimistic moment in our

lives, and a very in love moment. I’ve played it for years at my shows, but only people who have gone to live shows would know it.”

Referencing history--her own, her family’s her city’s--is inherent to Taali’s process. In making a triumphant return to New York this year, Taali has both rediscovered her artistry and, after attending Nefesh in Los Angeles, her Jewish culture on Were Most Of Your Stars Out? Infusing traces of traditional Jewish melody into every song--especially album opener “The Main Thing,”

“L.A. is where the three elements came together,” Taali says, reflecting on her last two years. “My Judaism, my legitimate love for pop music--and New York harmony.”

For those wondering, here’s the full Salinger line referenced in the EP’s title: “I’m sure you’ll only be asked two questions when you die: Were most of your stars out? Were you busy writing your heart out?”

For Taali, hers will always be.