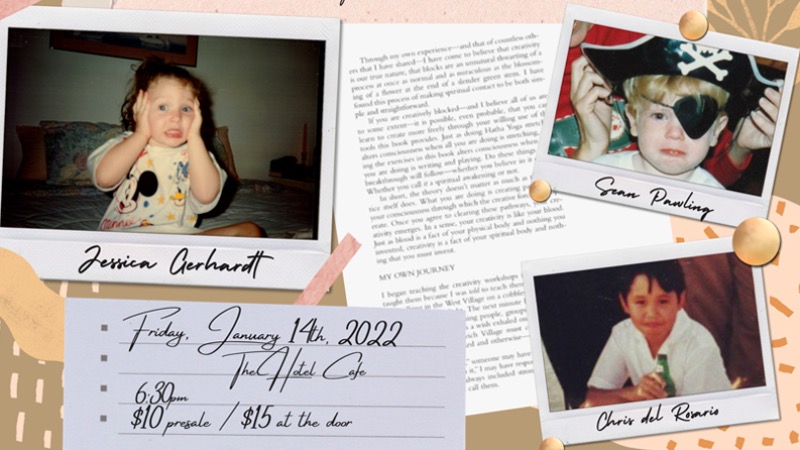 Jessica Gerhardt is an LA native and singer-songwriter-ukuleleist who has been writing songs since the age of 8. She began sharing her original tunes in high school at the open mic night Downbeat 720. In college while she pursued a degree in Psychology at Reed College in Portland, OR, she continued writing and performing her music, which led to her return home to LA to pursue a career in that field. Over the past decade Jessica has performed at countless venues throughout LA, toured the West and East Coasts, released 2 EPs and 10 singles, and is planning to release her latest single "Don't Be So Hard On Yourself" on Jan 14th. This song was inspired by her work with Julia Cameron's The Artist's Way, for which she has facilitated an annual book group with a diverse group of local and remote artists for the past several years. It was also inspired by her recovery work which is rooted in getting in touch with and re-parenting her inner kid. She hopes this song will be a balm to those who wrestle with their own inner critics and a reminder to be gentle with themselves.

Sean Pawling ’s infectious melodies and driving grooves take cues as much from Wagner as from 70s pop. That’s no accident—Sean started his career as a classical trombonist before turning alt-pop singer-songwriter. His layered, genre-defying performances, punctuated by powerful horn arrangements, land him at the intersection of Jason Mraz, Cake, and Unknown Mortal Orchestra. Sean’s music has been featured on Capitol Public Radio, the hit web-series Dorm Life, and has taken him on tour across the country, from Los Angeles to Nashville. Sean Pawling has played trombone alongside pop artists such as Jack Johnson and Matt Costa and has performed at prestigious venues such as the LA Greek Theatre, Walt Disney Concert Hall, and Lincoln Center NYC.

On January 14th, Sean will be celebrating the 10th anniversary of his award-winning EP Inner Child with the warm sounds of voice & trombone quartet. Elisha from Inner Child was featured on the Canadian Broadcast Corp’s (CBC) program Shift.

Christopher del Rosario is an L.A. Filipino native & indie singer-songwriter who graduated from Cal State Channel Islands with a B.A. in Performing Arts (Emphasis on Music). His style is heavily influenced by Radiohead and Fleet Foxes - incorporating a variety of musical textures while adhering to a foundational indie-folk sound. Christopher’s debut EPs “Mutual Masquerade” & “Felt” (available on Spotify) garnered well-received radio play and live streams. His songs are inspired by personal romantic interludes and experiences with loss and life. Christopher is a featured artist in indie-cult film “Godzilla Party,” Lifetime Movie’s “Her Deadly Groom,” in addition to live shows at The Mint, Hotel Cafe, Junior High, TRIP, Republic of Pie & FPAC22.